Travel businesses were hit with multiple doses of bad news on Saturday and Sunday, with the US expanding its Europe travel ban to include the UK and Ireland, a number of South American countries bringing in flight restrictions and Australia joining New Zealand in requiring all people entering the country to self-isolate for 14 days.

American Airlines, the second biggest in the world, said on Saturday that it would start implementing a phased suspension of nearly all long-haul international flights from Monday, amid reduced demand and travel restrictions due to the ongoing coronavirus outbreak. 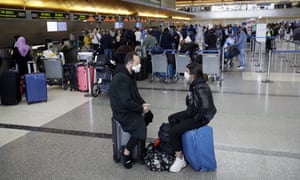 The cruise industry also suffered another setback when two ships were placed in quarantine in Chile after an elderly British man aboard one of them tested positive for the coronavirus, the health ministry announced on Saturday.

The US government said on Saturday that it would “immediately” begin working on ways to help the coronavirus-hit aviation and cruise industries as they scramble to stem losses and protect jobs.

The crisis facing the industry has been accelerated by the latest extension of the US ban on incoming travel, with US vice-president Mike Pence announcing at the White House  that British and Irish travellers would also be barred from entering the US for 30 days.

At the same press conference, Donald Trump revealed that he had taken a test for the virus, with the White House later revealing that he had proved negative.

In Spain, the wife of prime minister Pedro Sánchez has tested positive as her husband formally declareda state of emergency over the coronavirus. Spain is now the fourth-worst affected country in the world after it recorded more deaths to take the total to 196. Sánchez said the country would be placed in lockdown for two weeks and ordered people to stay at home unless they had to buy food or medicine or go to work or hospital.

The outbreak also worsened in the UK on Saturday with the total of deaths nearly doubling from 11 to 21 amid continued controversy about whether the government’s policy aimed at creating “herd immunity” from the disease would work or not.

Around the world, varying measures of control continued to be imposed on populations from the Philippines, where the capital Manila was in the process of being sealed off, to Argentina where flights from countries badly hit by the virus have been halted.

The prospect of a shattering blow for the airline industry was foreshadowed by the Australian prime minister, Scott Morrison, as he announced that all international passenger arrivals from midnight Sunday would be legally required to self-isolate for 14 days.

The flights would dry up “very, very quickly”, he said and set up serious concerns for the country’s $3.5bn cruise industry by adding that passenger ships from foreign ports would be banned for an initial 30 days.

Even before the new curbs were announced, the chief executive of British Airways told staff that the airline was in a “fight for survival”.

US Treasury secretary Steven Mnuchin said the government would “immediately” start working with Congress to support the afflicted industries.

As the curbs were revealed, United and Delta airlines said they would start cutting flights to the UK and Southwest, one of the few US airlines still flying a full schedule, said it was “seriously considering” cutting flights.

United said it would give credit for the value of the ticket for any customer whose international travel is disrupted by more than six hours because of schedule changes resulting from government restrictions. Customers who do not use the credit for 12 months will get a refund.

Between 16 March and 6 May, American will reduce its international capacity by 75% on a year-over-year basis, it said in a statement, adding that the changes will result in the airline parking nearly its entire widebody fleet. The airline also anticipates its domestic capacity in April will be reduced by 20% on a year-over-year basis.
Domestic capacity for the month of May will be reduced by 30%, the company added. 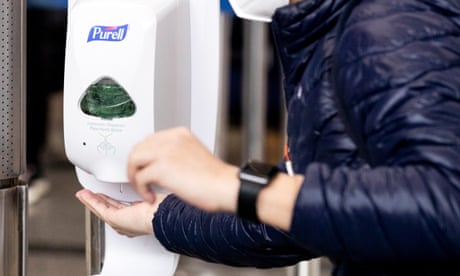 The US Chamber of Commerce on Friday called on the government to “turn next to a package to assist impacted employers … No business should go bankrupt because of a temporary loss in revenue as a result of the coronavirus.”

In Europe, the situation for the sector was increasingly dire.

Chile, meanwhile, has quarantined more than 1,300 people aboard two cruise ships after an elderly Briton aboard one of them tested positive for the coronavirus, the health ministry announced Saturday.

The 85-year-old man, who is reportedly in good condition in a hospital in the city of Coyhaique, showed symptoms of the virus after getting off the Silver Explorer ship in the far southern port of Caleta Tortel, 2,400 kilometers (1,500 miles) from Santiago.

The other ship, the Azmara Pursuit was currently near the port of Chacabuco after authorities banned it from landing passengers there, on grounds that it was carrying suspected cases of the coronavirus.